With Diwali and the heating season starting this month, the need to confront pollution becomes even more critical. In a move that is revolutionizing India’s approach to pollution policies, the Gujarat city of Surat began the world’s first emissions trading scheme (ETS) for particulate pollution on September 15th. A new analysis by researchers from the University of Chicago and Yale University quantifies the significant potential the programme offers to reduce pollution while allowing continued economic growth.

“This first look at the programme finds that the Gujarat Pollution Control Board’s ETS is projected to both foster economic growth by reducing industries’ compliance costs and improve people’s health by reducing particulate air pollution. It is bringing Indian environmental policy to the global frontier,” says Michael Greenstone, a co-author of the report and the Milton Friedman Distinguished Service Professor in Economics and director of the Energy Policy Institute at the University of Chicago.

Greenstone and his coauthors find that the programme can reduce particulate pollution by 29 percent. It can do so by setting a cap on the amount of pollution plants can emit equivalent to the amount they would have emitted if they had complied with current regulations, and allots permits to plants. Plants that emit less pollution can sell their extra permits to plants that find it too costly to comply.

This “cap-and-trade” system delivers plants greater flexibility and will cost plants 36 percent less than installing pollution abatement equipment. Because a large majority of permits are given to industries for free at the start of the market, plants able to sell permits actually make money from the programme. All total, the analysis finds that the vast majority of industries will see their profits increase by greater than 5.5 lakh per annum with the average increase in profits being 8.6 lakhs per year.

“The implementation of the pilot ETS demonstrates remarkable foresight and imagination from Indian regulators and industry who are now using cutting-edge technology and economic techniques to balance the twin objectives of economic growth and air quality improvement,” says co-author Rohini Pande, the Henry J. Heinz II Professor of Economics and director of the Economic Growth Center at Yale University. 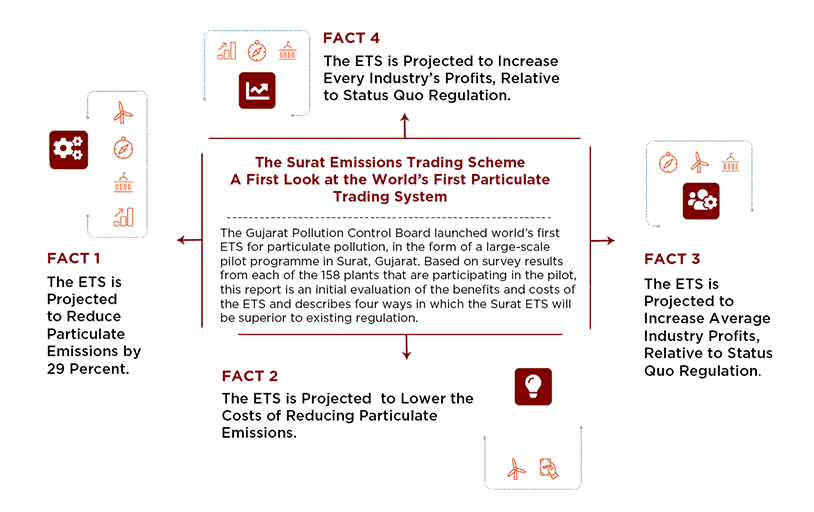 Greenstone and Pande, along with their colleagues Anant Sudarshan from the University of Chicago and Nicholas Ryan from Yale University, and others from The Abdul Latif Jameel Poverty Action Lab (J-PAL), are fully evaluating the benefits and costs of the pilot and will provide periodic analysis throughout its course as well as a full evaluate at its conclusion, in coordination with the Gujarat Pollution Control Board.